It was our second day in Tasmania (read about Day 1 in Hobart here) and we were off to Bruny Island! Known as a food lovers paradise, it is home to numerous local producers and includes a cheese factory, oyster farm, vineyard, smokehouse and much much more. Bruny Island is made up of a North and South Island which are separated by a narrow strip of land called “The Neck”. Access to the island is by car ferry departing from Kettering, taking around 15 minutes.

It was about a 30 minute drive to Kettering from Hobart, and we arrived on a gorgeously sunny day at the wharf to make the Bruny Island Ferry crossing. 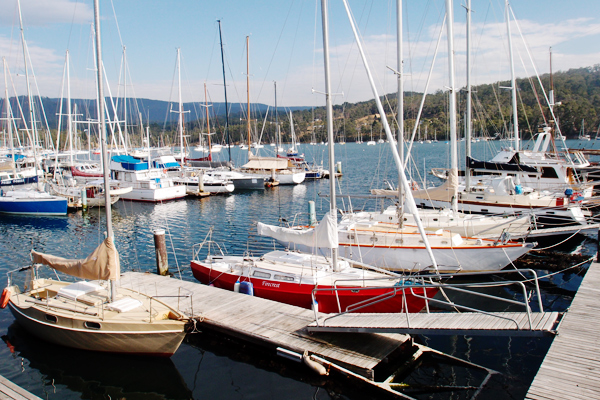 Once on dry land, we start our drive to foodie stop #1, taking in the gorgeous scenery around us. 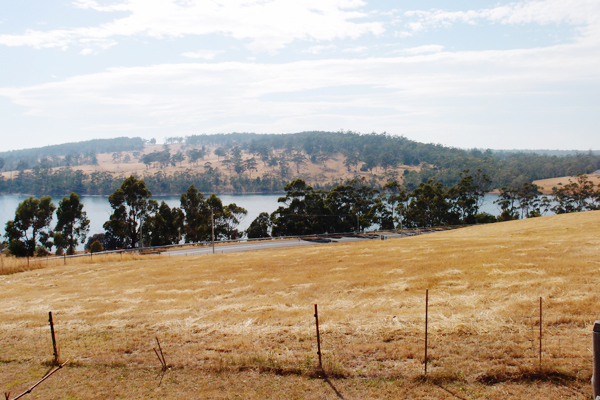 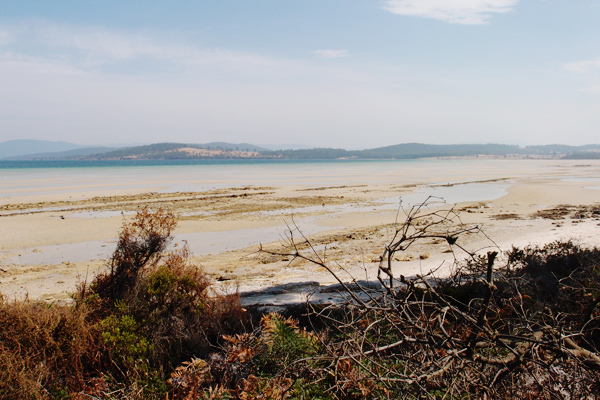 We arrive at our first destination, Bruny Island Smokehouse, still a bit full from breakfast but ready to taste up a storm!  Located at 360 Lennon Road, North Bruny, the Smokehouse resides in a beautiful stone building, made with timbers and stone from the property. 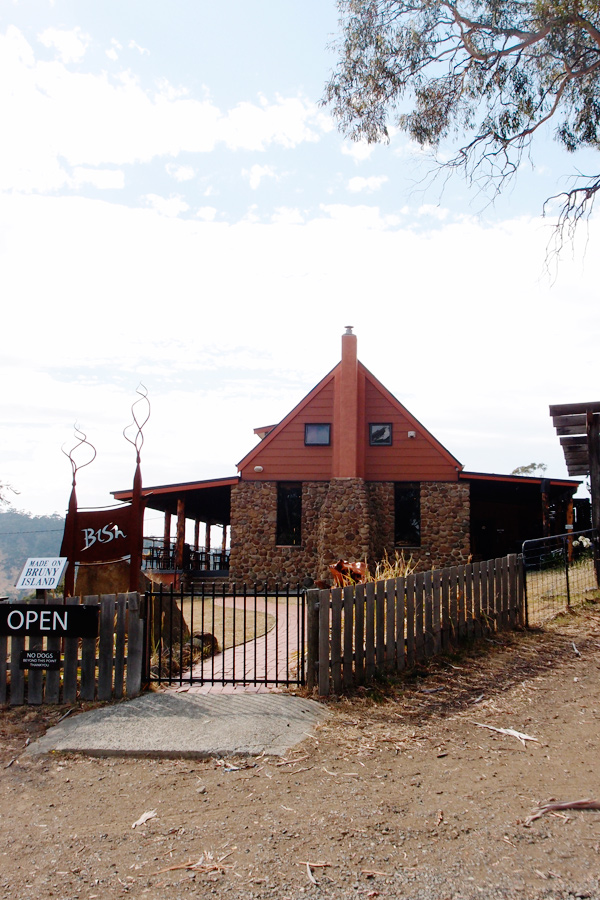 A tasting board was presented to us on the most gorgeous slab of engraved Tasmanian wood. We sampled a selection of smoked trout, salmon, quail, chorizo and wallaby (which was delicious!) along with an array of tasty chutneys. 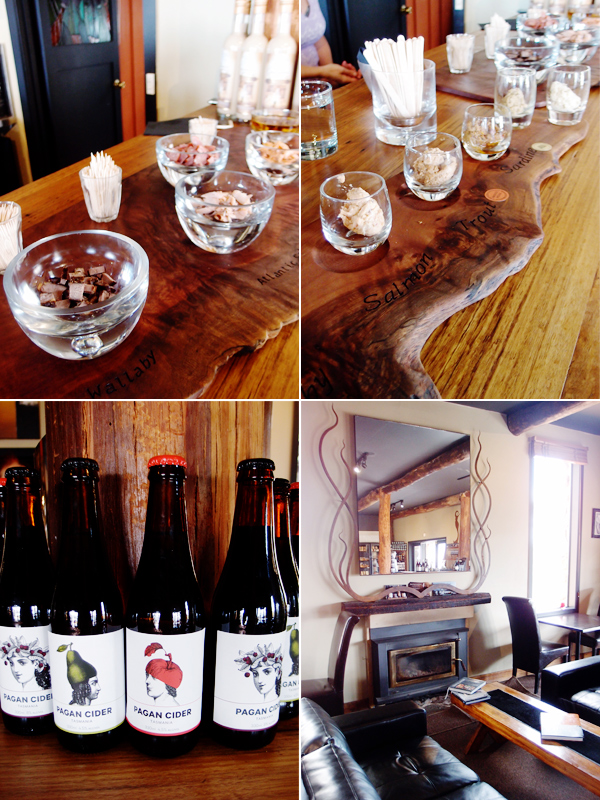 Our next stop on our island food journey was Get Shucked, located at 1735 Bruny Island Main Road, Great Bay. The owner, Joe, kindly sat down with us and told us about the history of his business and his passion for locally sourced food is evident.

He offered us a huge selection of oysters, including Oyster Wontons (wrapped in wonton pastry, deep fried and served with wasabi cream), Mother in Laws Kilpatrick (cooked in the shell and topped with Marie T’s worcestershire sauce and Bruny Island Foods bacon) and Asian Fusion (a panko crumbed oyster sitting on a nest of rice noodle salad, topped with a tasty dressing).

You can sample all these and more on the Get Shucked Platter ($45). 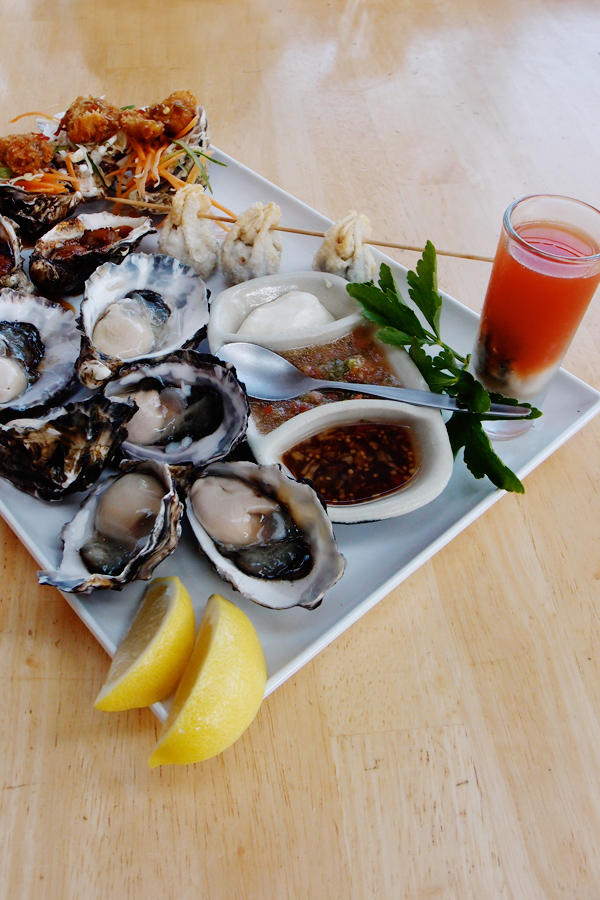 I think I died and went to heaven when I arrived at Bruny Island Cheese Co, 1807 Bruny Island Main Road, Great Bay. The walls are lined with condiments, cheese and wine, and the bench is laid out with a delicious array of cheeses to sample. 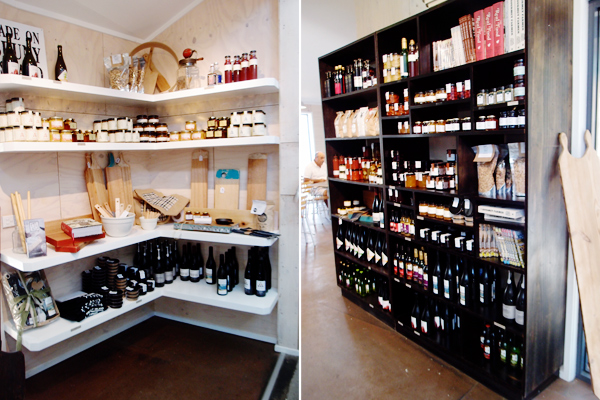 This artisan cheese maker makes and matures their cheeses from both cows’ and goats’ milk using traditional techniques. 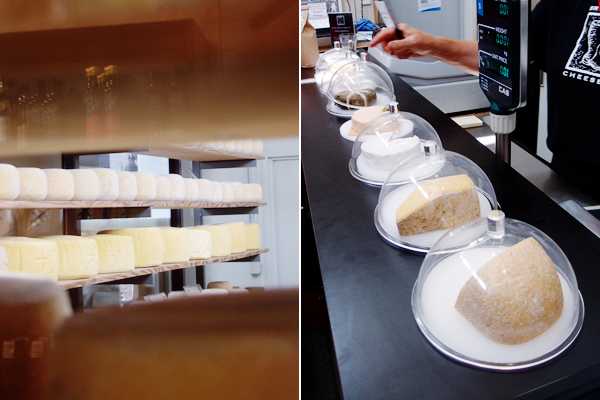 We ummed and aahed over the lunch menu for quite a while, finally settling on the highly recommended Baked Otto served with sourdough bread and pear relish ($24), which is a simple fresh cheese wrapped in locally made Prosciutto and then baked in a hot oven for 15 minutes until oozy and delightful.

Our second selection was rumoured to be “the best toasted sandwich you’ll ever have”, so we had to try the sourdough toastie with traditional ham, raw milk cheese and good mustard ($8.50). It definitely is up there with the best! 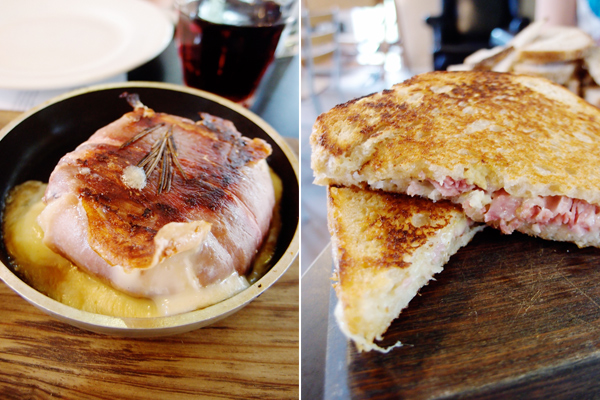 We took a well-deserved waddle through the bushland after our cheese-filled lunch in search of The Neck lookout at the game reserve. As it turned out, the signage was wrong and we were in fact nowhere near the lookout! At least we got a nice walk. The weather forecast had predicted high winds and storms, and as we stared up at the impossibly perfect blue sky and felt the hot sun against our skin, we assumed they had gotten it wrong. 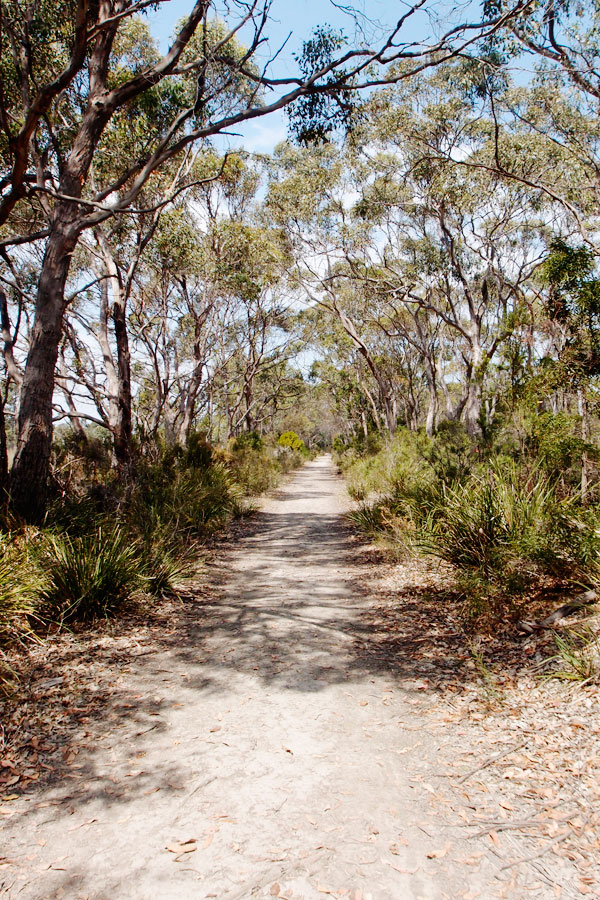 (And I was, of course, dressed inappropriately for bushwalking.) 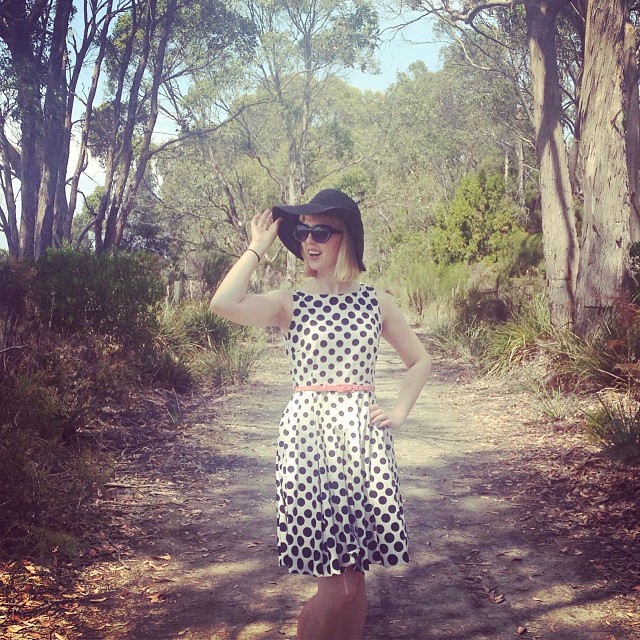 We eventually made it to The Neck lookout. See those grey clouds overhead? Ok, so maybe the weather bureau knew what they were talking about. The Neck is a narrow strip of land that connects the North and South parts of Bruny Island, offering 360 degree views of the water. The Lookout is very high up, and very exposed. And that is when we got hit by the storm.

We foolishly thought we could beat the looming clouds, running up those timber stairs as fast as our legs could carry us, so we could take a few snaps before the rain started. We arrived at the top, huffing and puffing. We could actually see the rain quickly approaching us over the water, lightning forking into the sea below. It started to get close, really close. I was worried about my freshly blow-dried hair. And then suddenly, all of us on the viewing platform were hit with such a force we were thrown against the handrail.

RUN! Go go! I remember a man near us shouting. I tried to run down the stairs, but the force of the wind was so strong I was pressed up against the handrail. Sand blasted against our bodies painfully and soon hail belted us too. Every few seconds I managed to take another step down the stairs before the wind got too strong and smashed me against the handrail again. We were soaked to the bone within 30 seconds. It felt like an eternity but we eventually made it to the bottom of the stairs. There were several people at the bottom, worriedly checking we were ok. We had lost the two people behind us (they were small, we think they must have laid low until the storm passed). 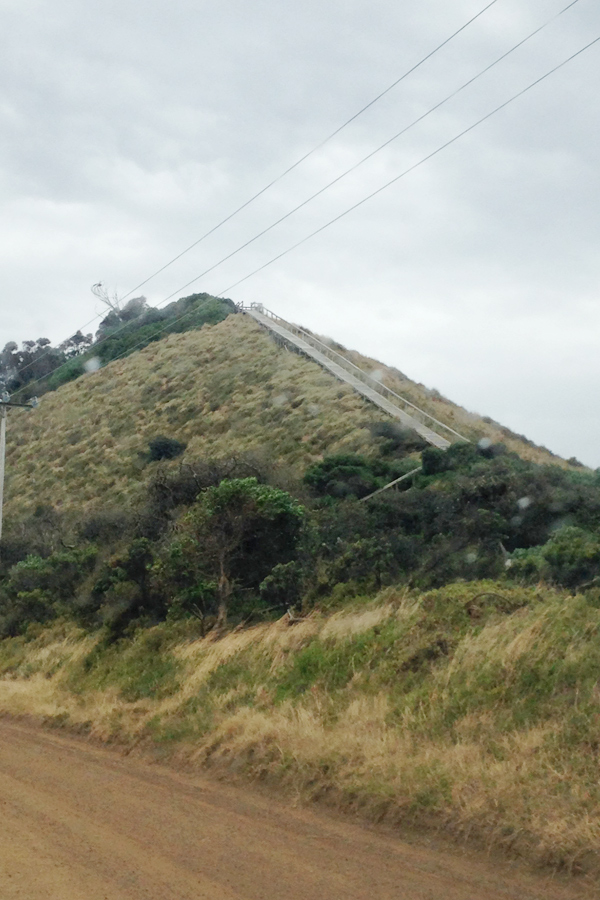 Naturally I had to take a selfie when we were back in the safety of the car. And yes, my hair was ruined. 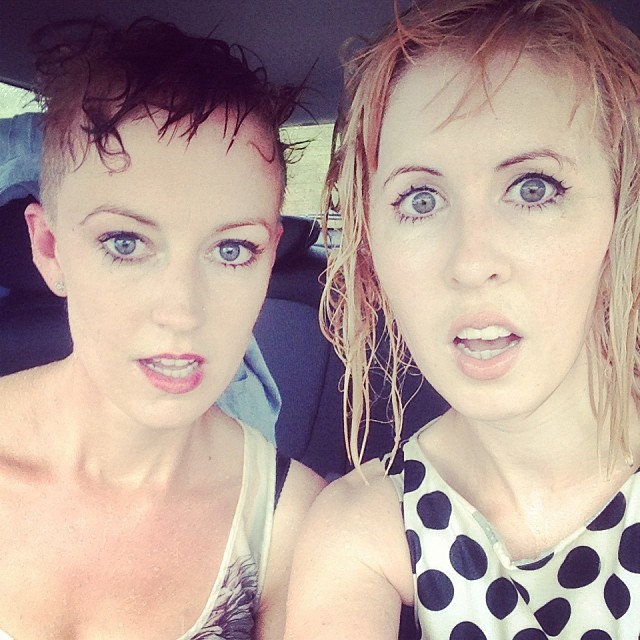 Cold, wet and shivering, we drove to the nearest cafe for shelter and warmth. But oh, a giant tree had fallen across the road which was the only way off the island. Thank god for handy Tasmanian men, their ropes and large vehicles. 15 minutes later they had dragged the tree off the road and we were moving again!

Unfortunately all the power had been cut to the island due to the storm. The winds were still strong and we were nervous about the debris flying everywhere. We had to abandon plans of visiting the lighthouse and drove to the ferry to leave early. 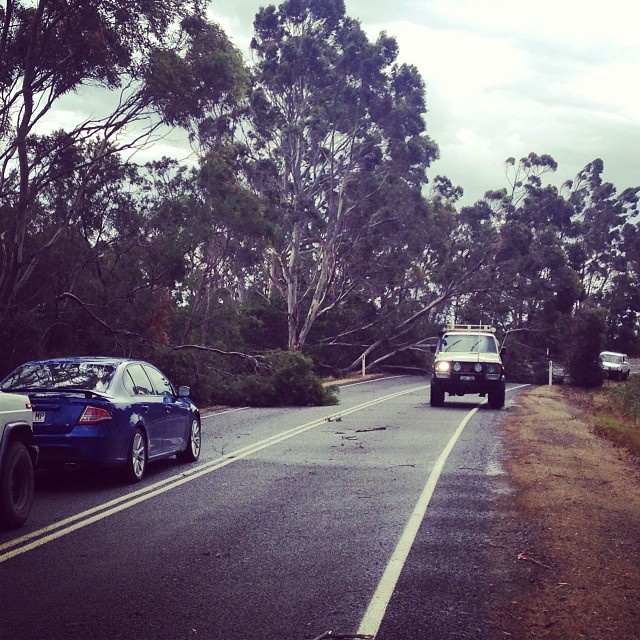 On our approach to the ferry terminal, we noticed a line of cars. A very long line. We sat in our car, unmoving, for over 2 hours. Something was definitely wrong. Eventually a raincoat-clad lady approached our car, explained the roof of the cafe had been blown off and landed on the jetty, meaning no one could get on or off the ferry. I was starting to feel like we were on an episode of Lost. The island didn’t want us to leave.

Fast forward another hour, we’d made it onto the ferry and arrived back on the main land safe! The news that night was dominated by storm news, with winds being clocked up to 150km/hour. And we just happened to be in literally the worst place to experience it. But what a great story we had to tell!

Yummly
Tasmaniaweekends away
March 21, 2014 by Swah 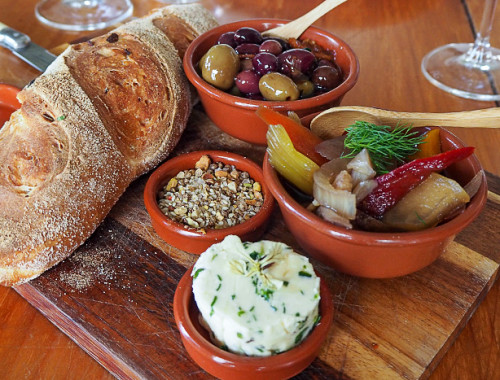 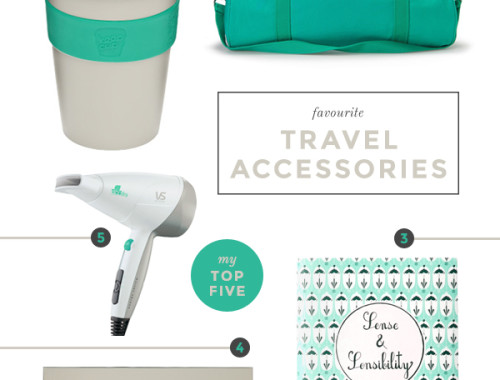 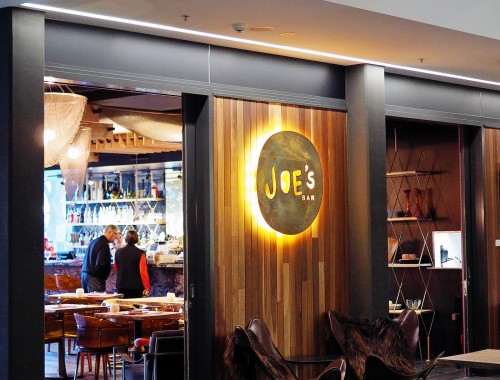